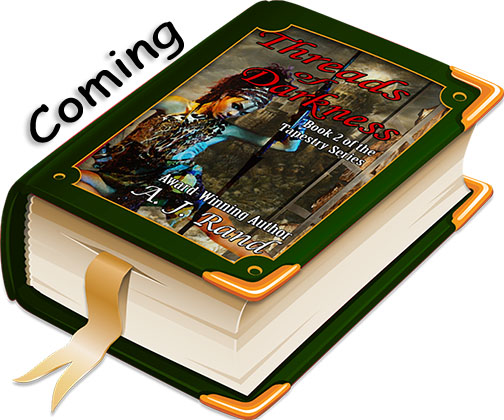 The 2nd book in the Tapestry series by A. J. Rand

Jarnell is imprisoned by the Elves upon bringing the bodies of Dekion and his father back to lay to rest in Elven lands. Then one day she just "disappears" from custody and no one has a clue as to her whereabouts.

Sahri-tah returns to claim her right to rule the Orcish in Mikaelia, and now war is brewing with the Orcs in both lands.

Minobu seeks further answers to the origins of the Lantern and the flame and doesn't like what he finds.

Daedic of Draecus is plagued by visions of Jarnell, and can no longer tell the difference between dreams and her previous visitations.

With two countries on the brink of war with each other and the Orcish, the question everyone is asking is… Where is Jarnell?